EAU CLAIRE (WQOW) - The Eau Claire County District Attorney's Office will not be prosecuting Joe Luginbill for fraudulent activities that spanned from 2016 to the end of January 2020. This, despite police officials saying "an arrest for Theft by False Representation and Obstructing was appropriate" in their report.

According to the police report:

Their investigation began after being given a tip in July 2019 that Luginbill was allegedly using funds from the Luginbill Children's Foundation for personal use.

When looking at bank records, investigators found Luginbill opened a bank account listed as "Luginbill Childrens Foundation Inc, DBA Andrew Cray Memorial Scholarship" that was opened in 2018, described as a small business, and purpose checked as a non-profit. Luginbill was listed as the sole owner and signer to this account. Over the course of the investigation, investigators found Luginbill to have had access to numerous bank accounts across Charter, Royal Credit Union and U.S. Bank.

In regards to Lyft, the police report said Luginbill often had his home address as the pick up or drop off site. Lyft was also used while he was in California, or Washington, D.C. A former employee at the Children's Foundation told investigators they were not granted the option to use Lyft with the foundation's funds, leading investigators to say in their report that they believed Luginbill was using these funds for his personal use.

On May 22, 2020, investigators spoke with Luginbill over the phone. During the conversation, Luginbill said he got the idea for the Foundation in 2016 when he was a case worker for Eau Claire County. Luginbill told investigators that the foundation had become unmanageable and unsustainable. He also said he did not receive a salary from the foundation, only reimbursements for a conference and supplies.

We are reading comments from Joe Luginbill for the first time since power was shut off at the State Theatre and Eau Claire police announced they were investigating Luginbill’s foundation.

When asked about invoices, logs and records, Luginbill said he wished he had done a better job, and "the record keeping system was not really something that I was good at." He later said  "recording keeping process was abysmal at best" but he would email investigators what he had.

Later in the police report, investigators said "there were numerous statements he made that were either untrue or conflicted with the evidence I had obtained during the course of this investigation." This includes a RISE loan application in which he indicated he made $2,900 per month from his self-employment with the foundation. Investigators said if he was being paid, this would also mean that of all the money raised by the foundation, 70% was then paid to Luginbill.

The police report also stated "based on my phone conversation with Luginbill, it led me to believe he was providing me with a false narrative of information he thought I would like to hear so he did not get into trouble. As a result, it is difficult to determine what information Luginbill provided was truthful versus untruthful unless there was supporting evidence to back up the claims."

The police report concluded "when inspecting simply one aspect of this investigation as a whole, one might be inclined to believe Joseph Luginbill simply mismanaged and/or comingled some of the LCF funds on a few occasions. However, when combining all the information obtained throughout the course of this investigation, it becomes quite clear that Luginbill used substantial amounts of charitable funds for his personal use. There were hundreds of debit card transactions from the LCF accounts that appeared personal in nature, there were thousands of dollars in online LCF charity donations deposited into Luginbill's personal account (despite there being a charity account available), and there were numerous questionable "reimbursements" Luginbill had made to himself from the LCF charity account. Although Luginbill did appear to use some funds from his personal account towards LCF, there was still a discrepancy of approximately $22,000 in funds that appeared to have benefited Luginbill in a personal capacity."

Eau Claire Police Department officials sent a copy of their analysis to the Eau Claire County District Attorney's Office, and stated "I expressed that an order-in arrest for Theft by False Representation and Obstructing was appropriate" on August 25, 2020.

The police report states that on October 26, 2021, the DA's office made the decision not to prosecute the case.

"After careful review of all of the police reports, documents, and information referred, consultation with colleagues inside and outside of the District Attorney’s Office, and discussion with Eau Claire Police Department personnel, it was concluded that there was insufficient evidence to issue criminal charges. Based on the totality of evidence submitted for review and the complex nature of the law surrounding charitable organizations, the District Attorney’s Office determined it could not prove beyond a reasonable doubt—the required burden of proof the State must meet for conviction—that Mr. Luginbill committed a crime. If additional evidence comes to light and is referred to the District Attorney’s Office, the charging decision could be reconsidered.

The District Attorney’s Office routinely pursues criminal cases in which the defendant is not in Wisconsin."

A major project for the Luginbill Children's Foundation was the Smile House, a transitional home intended for people who were too old for foster care, but not yet ready to live on their own. While a building began renovations, Smile House never opened.

While speaking with investigators, Luginbill said the Smile House fund still had $7,000 as of May 2020. But the police report later states that subpoenaed records for both Charter Bank and Bank of America did not show anywhere near this substantial amount of funds left in them.

You Ask, We Answer: What’s next for the State Theatre?

Its marquee once lit up Eau Claire’s downtown, but the State Theatre has been dark for quite some time now.

Another major project for the children's foundation was the State Theater. Luginbill told investigators in May 2020 that he rented the theater, and had brought in a construction company to beautify the space. Luginbill said that donations received for the theater were not enough to sustain it, and that in the end "everything became too overwhelming and too much."

The LGBTQ community center was a subtenant of the building when the utilities were shut off in January 2020. Luginbill told investigators he felt horrible about what happened.

Click the document below to see the full police report. 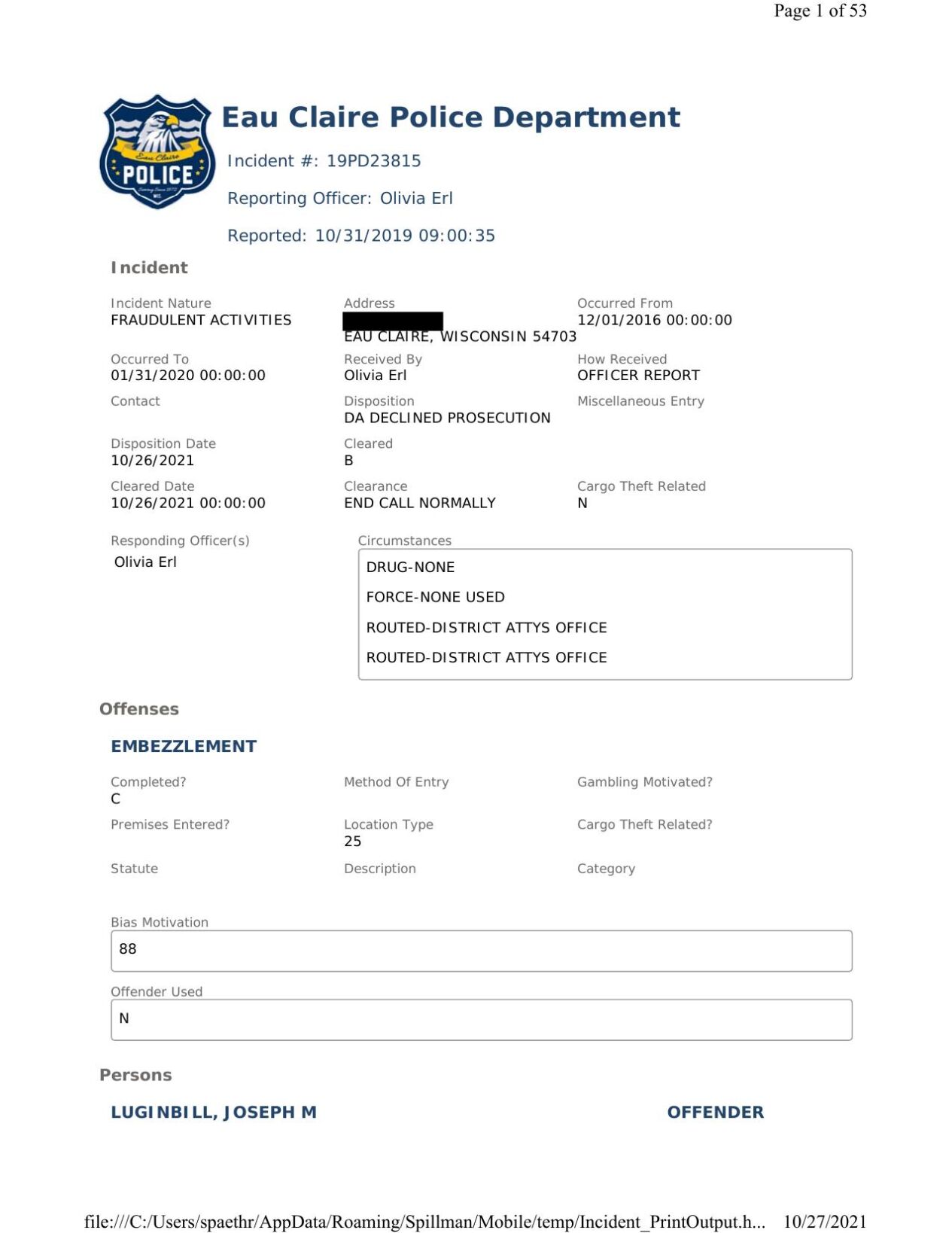 Eau Claire Area School Board member Joe Luginbill has announced he will no longer be on the school board.

Community reacts to lack of charges against Joe Luginbill

Lawmakers want epinephrine to be more affordable and accessible